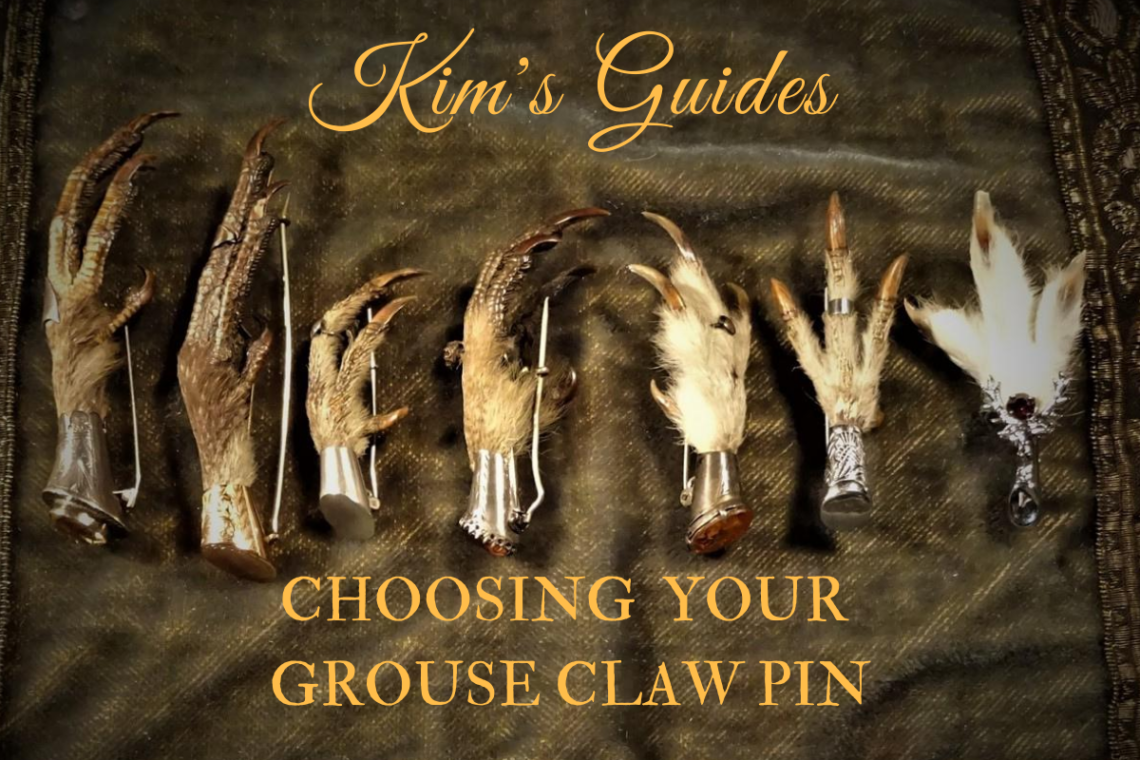 Grouse claw pins ooze individuality, but how do you choose the right one for you? Whether you’re looking for a pin to wear on a kilt, a macabre pin for a Gothic or Steampunk outfit, or a quirky brooch for your winter jacket, I hope my guide will help you understand these exceptional pieces of jewellery a little better.

If you read my earlier blog about the history of grouse claw kilt pins, you’ll know what they are and why they were invented, but how do you choose the right pin for you?

Here, I’ll show you the pins I’ve collected for my Curiosity Shop, and the surprising differences in the pins. The contrasts in colour, claws, colours of the stones, engraving and metals, make these wonderful pieces of traditional Scottish jewellery very special. Each piece is individual and an unusual addition to your wardrobe. Kilt or no kilt.

Grouse Claws were originally part of highland traditional dress along with sporrans, belts, buckles and brooches. Kilt pins were introduced to weigh down the front of the kilt rather than to join the two front pieces together.

As trhe national game bird of Scotland, the red grouse were chosen to decorate the kilt pins. Later, the pins were worn as good luck charms to bring luck to the hunt – but obviously, not the poor old grouse.

In more recent years, as in the photo above, grouse claw kilt pins are sold as brooches (Braisd Spog Circe-Fraioch). They are now souvenirs from The Highlands and have have a white fluffy appearance and are very feminine. But originally their appearance was much different, you might say, a little macabre.

So, let’s take a little step back through time and a look at how they’ve changed through the years.

From Macabre to Pretty

The main difference in the pins, from the Victorian era up until recently is based on who the pins were being sold to. Men purchasing a pin for their kilt in the mid-nineteenth century wouldn’t have been particularly concerned about whether their pin was fluffy or scaly. They would have been more concerned on the quality of the piece itself. Women, however, buying something today would more likely prefer a white, fluffy appearance to adorn their woollen sweater or tartan jacket.

So then, how macabre a pin looks, also gives an indication of the age of the pin or brooch.

The pin shown above, is one of my earlier, Victorian examples. Its appearance is a little macabre with the long slender scaly claws and brown dappled feathers. However, the beautiful engraving in the setting also makes this piece very ornate and decorative. It’s a rather large pin too and would have been perfect for keeping the front of a kilt weighed down.

In contract to the Victorian Pin, above is a pin from the late 20th century. It has a pretty appearance with white fluffy feathers. Even on the reverse, the scaly features are covered with feathers. These don’t look macabre (unless of course, you have a bird phobia!). The setting on this piece is very bright silver metal, probably chrome, and it has a purple glass stone. The setting is much cheaper and you can see that less crafsmanship has been used compared to the earlier piece. This was made to be sold as a brooch rather than a kilt pin.

The later pieces were made by the jewellery company Miracle. You can find the word ‘Mizpah’ on the back of the setting.

The word Mizpah is a biblical, Hebrew, word meaning ‘watchtower’. It describes an emotional bond between two people who are separated. From the mid 1800’s, pieces of jewellery and keepsakes marked ‘Mizpah’ were given as love tokens to signify their bond or as a parting gift. The word meant:

In other words: ‘keep us safe while we’re apart’.

So why is there a difference in the appearance between the old and the new pins?

You can be forgiven in thinking the difference in the pins is because the birds have changed over the years, or that that younger birds are now used. Although this may be the case in some instances, the difference is much simpler.

Grouse have adapted to the harsh winter weather conditions by growing a winter coat much like other animals. In winter, the legs and feet become covered in feathers to help them keep warm and enable them to dig into the snow to forage for food.

The only difference between the two styles rests on when the bird was hunted. In the summer, the bird would have scaly feet and in the winter, fluffy feet.

So, we’ve already talked about how to tell the age of your pin by appearance, but you can also tell the age by the clasp on the back of the pin.

Above are three newer pins. Notice how the clasp ranges in size and shape in all three examples. In earlier pieces, the clasp is curved wire, as in the picture below. Quite simply, the older the pin the simpler the clasp.

Another indication of age is the hinge. Again, the simpler the hinge the older the piece. Above, you can see that the hinge on the left is a tube hinge. In contrast, the one on the right is a modern round hinge.

The design of grouse claw pins has changed over time with changing fashions. Generally, the older the piece, the more work and crfatsmanship has gone into making the pin. Victorian pins were quite ornately decorated with engraving to the silver and flourishes around the setting of the citrine stones. The pin third to the left, in the picture below, although still mid to late 19th century, is quite plain with no stones or engraving. This was probably made in a simpler way to save money.

Note the newer pin on the right. Instead of engravings, this pin has been shaped into a thistle by means of its manufacture. The newer the pin the more likely it is to have been manufactured rather than crafted. However, it is the claw itself which makes every piece unique and charming.

The picture above shows the whole collection of grouse claw pins in the Curiosity Shop at the current time. The pins have been placed in date order. The oldest is to the left and the newest is to the right to show the differences through the years.

It is evident that the settings towards the left have been made individually by craftsmen, whereas the later models were manufactured in bulk. Earlier pieces vary with engraving and the use of citrine stones to enhance the pins.

Obviously, these factors are an indication of worth. The older pins commanding a much greater price taking into consideration the craftsmanship involved.

How to Choose Your Grouse Claw Pin

The pin you choose depends on when and where you wish to wear it.

Because every grouse claw is different, every pin will be different. Just remember that the quality and craftsmanship of grouse claw pins has dimished over time. That doesn’t mean that the newer pins are not desirable. Just keep in mind how the newer pins were made and don’t pay too much.

Here are a few of my recommendations on how to choose your grouse claw pin:

To buy one of the grouse claw pins featured in this blog, go to my Curiosity Shop.